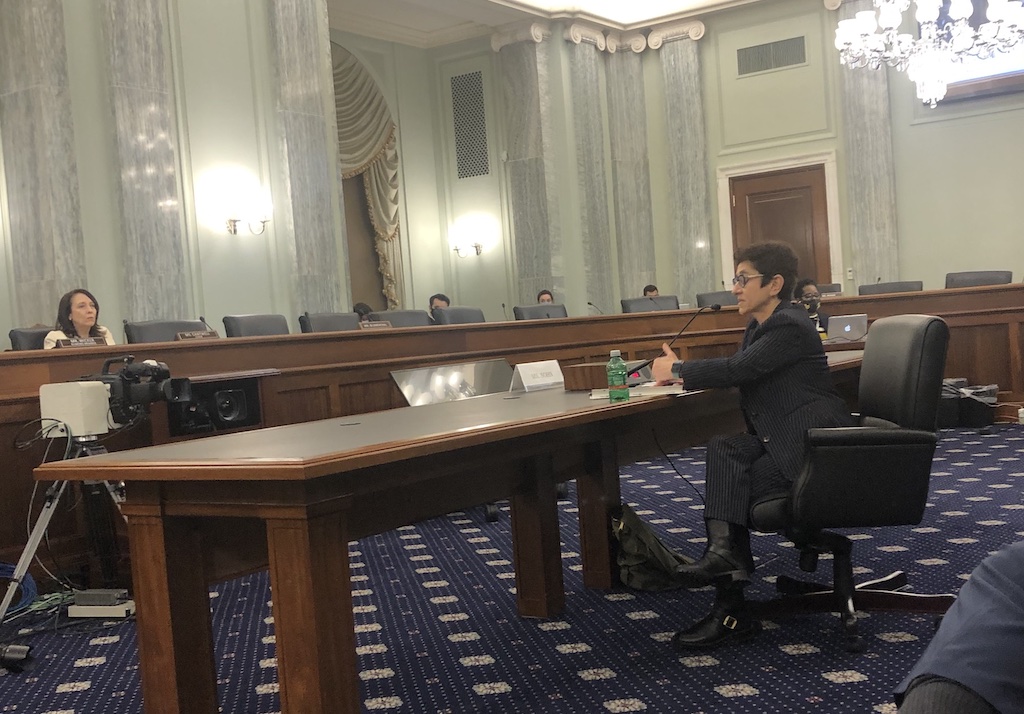 Photo of Gigi Sohn at Wednesday hearing by Theadora Soter

WASHINGTON, February 10, 2022 — Gigi Sohn’s recusal from a recent broadcasting matter that raised a potential conflict of interest issue did little to assuage Republican concerns Wednesday that she could serve as an impartial commissioner for the Federal Communications Commission.

In a hearing held for her nomination as the party tie-breaking commissioner on the agency, Republican senators voiced doubts about Sohn’s ability to remain non-partisan on all the issues she might encounter as an FCC commissioner.

After losing a lawsuit filed by the major television network stations for violating copyright laws against retransmitting broadcast signals, Locast settled a $32 million judgment for $700,000. GOP senators criticized Sohn for not providing details about the settlement.

By recusing herself from issues related to the subject matter of the Locast lawsuit, Sohn will not be able to engage on matters pertaining to copyright of broadcasting for three years. She also agreed to remove herself from any matters concerning retransmission consent regulations for the next four years.

In the opening remarks of Sen. Roger Wicker, R-Miss., the ranking member of the Senate Committee of Commerce, he insinuated that because Sohn signed the settlement only one day after the Biden Administration nominated Sohn as the next FCC commissioner, Sohn may have set in place a quid-pro-quo with the companies suing the Sports Fans Coalition New York Inc., in order to lower the settlement. Throughout the hearing other members of the Republican party echoed this allegation.

To this alleegation, Sohn says that she had no knowledge of when, or if, her nomination for commissioner would be announced. Furthermore, Sohn stated that she had no involvement in the settlement as it was handled by the lawyers of both parties.

Sen. Wicker’s has skeptical. He asked Sohn why she said nothing about the settlement in the prior hearing Wicker. Sohn said she was legally bound by the settlement agreement, and that she was not permitted to reveal the settlement’s details.

Later, Sen. Ted Cruz, R-Texas, read the contract Sohn signed out loud. “Last time I checked, the U.S. Senate is not the press. There is nothing in this document that prohibits you from disclosing to the Senate,” said Ted Cruz.

Conversely, Democrats said that the attacks on Sohn and her voluntary recusal are a smokescreen for the GOP to try and stop the FCC from moving forward in a positive direction. In her opening remarks Sohn said, “At the same time, I realize that this isn’t all about me. It’s about some wanting to stop the FCC from doing its important work ensuring that everyone in America has robust broadband regardless of who they are, what their income is or where they live, as mandated by the Bipartisan Infrastructure Law.”

Later, Sen. Richard Blumenthal, D-Conn., echoed this statement when he said, “The reason you’re here is bigger than you. It is part of an effort to deadlock, disarm, and disable the FCC.”

The Wednesday hearing followed a prior December hearing, and came as a result of Wicker’s request to question Sohn again about her record, particularly on Locast, prior to a vote.