The FCC chairwoman responded to a letter by members of Congress resisting calls to back down on net neutrality.

WASHINGTON, January 4, 2022 – Federal Communications Commission Chairwoman Jessica Rosenworcel said in a letter to lawmakers last week that she continues to stand by her view that the restoration of net neutrality principles would be the best move for the internet economy.

Rosenworcel was responding to an April letter by over two dozen members of Congress, who urged the chairwoman to maintain the current “light touch” regulations imposed by the 2017 commission, led by chairman Ajit Pai, who was appointed by then-President Donald Trump. That change rolled back net neutrality rules imposed by the 2015 Obama-era commission, which prevented internet service providers from influencing the content on their networks, including barring carriers from providing certain services for free over their networks – also known as “zero rating.”

In her letter on December 28, Rosenworcel, who was confirmed as commissioner of the agency by the Senate earlier that month, said the net neutrality principles of 2015 were the “strongest foundation” for the internet economy as a whole and is “fundamental” to the “foundation of openness.”

“Those principles drove investment on the edges of the network, which network operators responded to by investing in infrastructure that allows consumers to access the services of their choosing,” Rosenworcel said in the letter.

“I stand ready to work with Congress on this topic, as necessary,” she added. “However, I continue to support net neutrality and believe that the Commission has the authority to adopt net neutrality rules.”

The lawmakers – which include Cathy McMorris Rodgers, R-Washington, and Bob Latta, R-Ohio – used as support the efforts of service providers to maintain a robust network during the pandemic, as well as their willingness to waive late fees and open Wi-Fi hotspots as additional reasons for the commission not to impose further regulations on business. The letter also noted that the Department of Justice’s withdrawal of a lawsuit against a net neutrality law in California led to two providers axing services that relied on zero rating protections.

The lawmakers challenged previous comments made by Rosenworcel, who said that it was unfortunate that California had to fill a void left by the net neutrality rollbacks. But Rosenworcel reiterated those comments. “It is unfortunate that individual states have had to fill the void left behind after the misguided roll back of the Commission’s net neutrality policies,” she said in her letter.

And while the lawmakers said they “agree that harmful practices such as blocking, throttling, and anticompetitive behavior should not be permitted…we can achieve this without heavy-handed overregulation.”

The current make-up of the FCC includes two Democrats and two Republicans. President Joe Biden’s pick for a fifth Democratic commissioner to break the party deadlock, net neutrality advocate Gigi Sohn, is still awaiting a confirmation vote by the Senate.

This week, Sohn received endorsements from former FCC officials, but has received some apprehension from some lawmakers and a police association over her stance on end-to-end encryption.

Gigi Sohn explained her positions on issues facing the FCC. 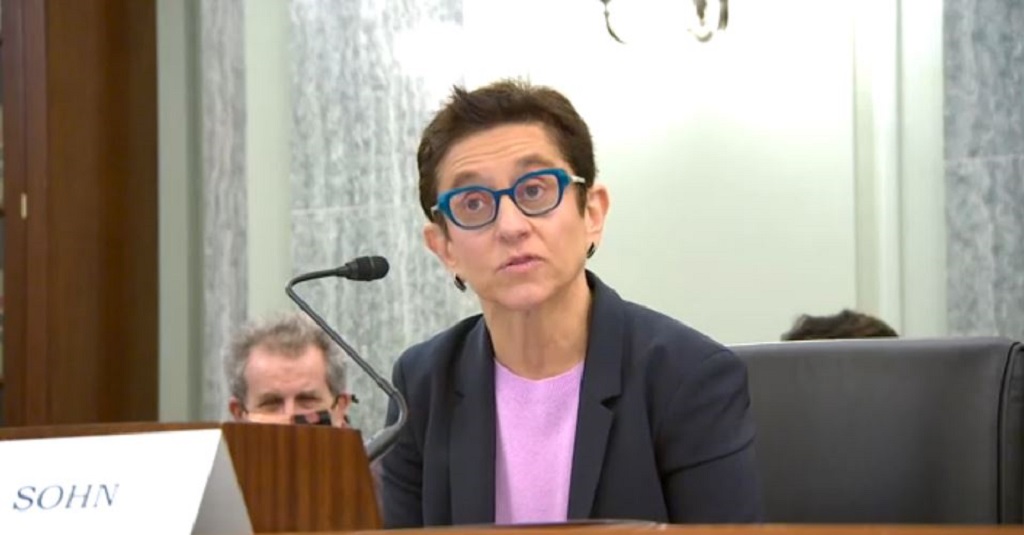 Rosenworcel is already chairwoman of the FCC by virtue of being named to the position by President Joe Biden. The president picks the chair of the agency from among the commissioners. However, Rosenworcel’s term as commissioner is to expire unless the Senate confirms her appointment to another term.

The committee on Wednesday also approved Alvaro Bedoya, a staunch privacy advocate, as commissioner of the Federal Trade Commission and had rounds at questioning Alan Davidson, who was nominated as head of the National Telecommunications and Information Administration, which will oversee $42.5 billion in broadband funds from the recently signed Infrastructure Investment and Jobs Act.

On mapping, Sohn called for a “crowdsourcing” effort amongst states to improve the quality of broadband mapping, as the agency has started to do. “A lot of states have maps already and they are quite accurate,” she said. Though she could not commit to a timeline, Sohn said that there could be no “good policy without good maps” and that if she were confirmed, she would dedicate herself to improve the FCC’s broadband maps.

Sohn also voiced her support for municipal broadband. “I have supported municipal broadband for a very long time,” she said, adding she supports open access models that allow service providers to share the same network. Sohn pointed to Utah as an example, where the model has been implemented successfully. She stated that the model has led to “enormous competition” for service providers.

When pressed as to whether the FCC should be able to preempt states and dictate how they implement their broadband policy, Sohn said she would like the FCC to have a better relationship with states. “If I am confirmed, one of the things I would ask the chairwoman [to use me as] a liaison to the states, because I’ve really formed very good relationships with them,” she said. “In the past, we have not [reached out] to the states and made them partners. We have been more adversarial.”

Sohn also came out in support of net neutrality. “What I am concerned about now, with the repeal in 2017 of the net neutrality rules and the reclassification of broadband, is that we have no touch,” she said. “[Net neutrality] is really much broader than [preventing] blocking and throttling. It is about whether or not bandwidth – which we all agree is an essential service – should have government oversight, and right now, it does not.”

“I have urged that Congress adopt a permanent broadband subsidy like the Affordable Connectivity Program – which is more money but is not permanent,” Sohn said. “You still always have the adoption problem as well, where people do not have the digital literacy, sometimes not even [actual] literacy, to be able to use the internet.”

Insofar that capacity and internet speeds are concerned, Sohn emphasized that the Infrastructure Investment Jobs Act “does prefer scalable networks to meet the needs of tomorrow.”

“What we do not want, I would think – or I would not want – is to come back in five or ten years and say, ‘Oh, my goodness! We spent all this money, and we still have slow networks, and we still have areas that are not served,” she said. “The ability to have technologies that can grow over time.” Sohn stopped short of explicitly listing specific scalable technologies.

On Big Tech, Sen. Ted Cruz, R-Texas, described “a confluence of liberals advocating for censoring anyone with whom they disagree,” and a situation where “big tech [is] eagerly taking up the mantle to censor those with whom they disagree.” Cruz asked Sohn how she could guarantee she would not “use the power of government to silence.”

A date for a vote on Sohn and Davidson’s nominations has not yet been scheduled.