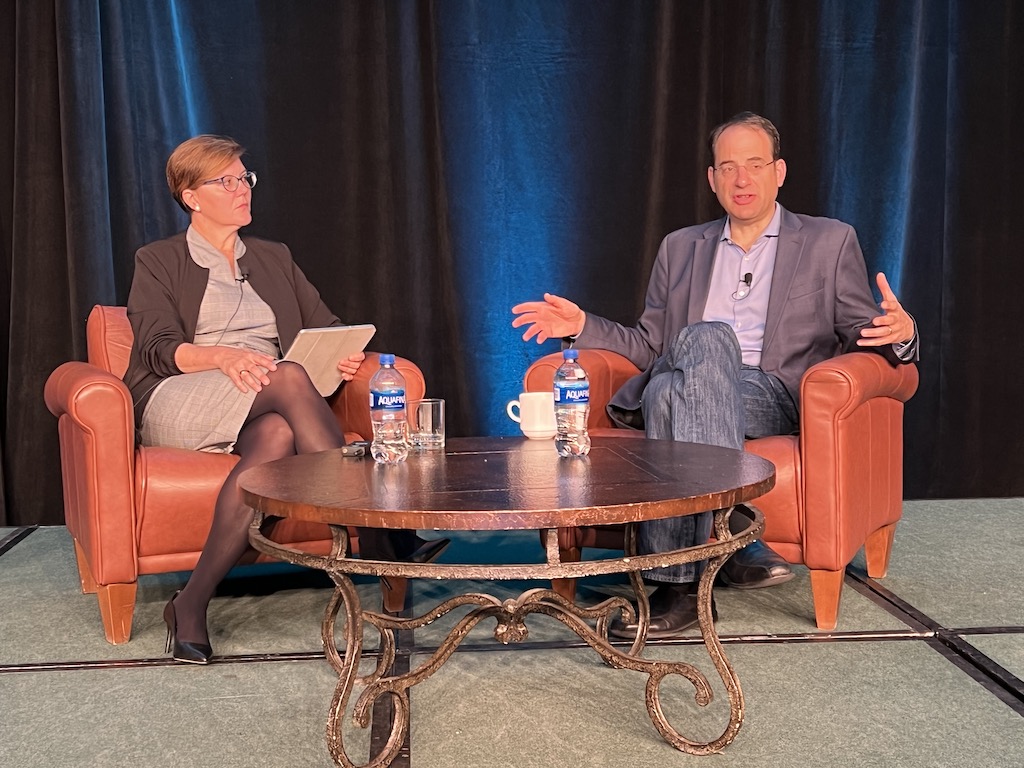 Photo of Jessica Dheere and Phil Weiser by Drew Clark

Speaking on Wednesday at the Mountain Connect conference here, Weiser split his time being critical Big Tech and inadequate broadband.With a large amount of federal resource devoted toward broadband deployment  focused on areas without high-quality broadband, Weiser said that Colorado had a key priority to double-check the accuracy of federal  broadband maps.

Weiser is deeply involved in technology and telecommunications issues because of his work as the founder of Silicon Flatirons, a research center at the University of Colorado at Boulder. He was interviewed by Jessica Dheere, director of Ranking Digital Rights, a program of the New American think tank in Washington.

But while heartened by the possible rollout of more reliable, affordable internet access being spurred by the Infrastructure Investment and Jobs Act, the pair was sobered by the dilemmas associated with Big Tech.

Dheere described a few of the social concerns of the big data era, including: Information overload, companies’ collection of vast amounts of data processed through algorithms, cloud services encouraging people to store their data and essential documentation on virtual servers, addiction to social media platforms and virality, and government technologies that make decisions for people.

“How do we take advantage of the amazing opportunities broadband creates for us, without sacrificing our civil and human rights, without being dehumanized by the technologies themselves and the corporations and institutions we interact with?” Dheere asked.

“We talked here about broadband as the great connector, but we also need to address the potential harms and create strategies for mitigating them.”

Bringing problems and solutions to the local level

Weiser responded that, “We need to focus on our state and local opportunities to solve problems together.”

He reflected on time he spent, more than a decade ago, working to create privacy legislation while working in the Obama administration. Such a bill would presumably give consumers more choice and awareness on how their data is collected and used, but no such federal measure has passed.

Now as a top state government official, Weiser has been supportive of state data privacy laws. Last year the state passed the Colorado Privacy Act, and his office as the state attorney general is required this fall to issue rules that will go into effect on July 1, 2023.

Colorado is the third state, after California and Virginia, to pass a comprehensive data privacy bill. Yet Weiser said that the rules to be crafted under Colorado’s privacy bill are principles-based and will be less prescriptive than California’s and Virginia’s.

“The core promise here is to give consumers basic control over their data,” he explained. “What information is being collected about you? Is it true? Are you okay with it being shared to other people? Do businesses actually have to assess what data they’re collecting, and ask themselves if it’s necessary?”

Notable provisions in the law include a “universal opt-out mechanism” which allows Coloradans to freely and easily opt out of their personal data being sold and used for targeted advertising.

The Colorado Privacy Act further requires users to opt-in for the processing of “sensitive data,” and grants district attorneys, as well as the state attorney general, to enforce the statute.

For more on how Colorado’s Privacy Act compares to other states, see Colorado’s New Data Privacy Law: Comparing to Other States and Looking Ahead.